Kinnaur Sightseeing – Temples & Monastries
Chandika Temple Kothi
A handsome temple dedicated to goddess Chandika, more especially designated as Shuwang Chandika has spread the fame of village Kothi in greater part of the district.The local people hold the goddess in great reverence and consider her to be one of the most powerful goddess. For want of social contact by the local people with their more advanced and brahmin ridden brethren they have evolved their own peculiar procedure of ritual and worship to this presiding deity. There is an image of gold, seated in an ark. It is danced up and down by four persons at the time of worship.


Her legend goes that she was the daughter of the demon devta Banaasur who presided over the Kinnaur. He had 18 sons and daughters. Chandika was the eldest among all. She presided over Sairag the heart of Kinnaur. But establishing her hold on the area was not so easy. The thakur of Chini ruled Sairag with a aid of a powerful demon. To defeat this enemy, Chandika took the aid of a cunning female relative called Byche. Byche duped the demon into placing his long hair between the grinding stones of a water mill. Then Chandika sprang on the helpless giant and severed his head with her sword. But a new head immediately replaced the old. Repeated swishes of her sword only brought forth more grinning faces. Frustrated and tiring, Chandika was soon in danger of drowning in the sea of blood created by her actions. Forsaking her pride, she appeared to her brothers for assistance. Chagaon Maheshwar responded and told her to kill the life sustaining beetle, hovering over the demon’s head. Chandika maintains her chief abode at Kothi in the middle of Sairag.
Mathi Temple at Chhitkul
Mathi is the local goddess of the people of chhitkul having three temples the main one said to have been constructed about five hundred years ago by a resident of Garhwal. The square ark of the goddess is made of walnut wood and is covered with clothes and surmounted by a tuft of yak tail. Two poles called bayanga are inserted into it by means of which it is carried. Her legend goes that she started from Brindavan and passing through Mathura and Badri Nath reached Tibet. Afterward she came to Garhwal, and via Sirmour reached Sarhan in Bushahr and ultimately reached the Barua Khad. Beyond Barua Khad she found the territory divided into seven parts. The deity of Shaung village was Narenas, her nephew. She appointed him to guard the territory.Then she proceeded to Chasu village. There too she appointed the Narenas of Chasu, her nephew as a guard. Then she visited the Kamru fort where her husband Badri Nath, was a guard of the throne of Bushahr. She further went to Sangla where her another nephew, Barang Nag, was responsible for safeguarding the Rupin Ghati. Thereafter she proceeded to Batseri village, where Badri Nath of Batseri, her husband was responsible for guarding a place named Dhumthan. Thence onward she arrived at Rakchham where Shanshares, yet another nephew was appointed as a guard of Dhumthan. Finally she arrived at Chhitkul and settled there permanently assuming the overall responsibility of safeguarding the seven divisions. After her arrival, people had plenty of food, animals had sufficient grass and the village began to proper. She had also a pujares. In the morning the pujares bring water from the nearby spring and worship goddess by burning incense, while musical instruments are played by Domangs.
Maheshwar Temple at Sungra
The portals of Maheshwar temple of Sungra have superb wood panels on either side. deeply cut images of prominent Hindu deities are a treat for the art historian. On the eastern wall are panels depicting the Vishnu Avatars and the symbol of the Hindu zodiac. The friezes on the eaves are beautiful and the buildings arround the temple courtyard are similarly embellished . A small stone shrine of eighth century stands a short distance from the temple doorway, evidence of the site’s antiquity. The Sungra Maheshwar was once said to have been attacked by an enemy of superhuman strength, often linked to the Pandava hero, Bhima. Bhima hurled a huge boulder at the temple from the mountain tops across the Satluj. The Maheshwar deflected the missile to one side. It now lies close to the road, a short way from the temple and still shelters the alpine flowers found only in the high mountains.
Chango Temples at Chango
Chango has three temples. In lower Chango, the red walls of Rinchen Zangpo temple stand out atop a little promontory  but contain little of note. Nearby, the village temple, in more regular use as a place of worship, has a large prayer wheel, clay idols and contemporary wall paintings. A large image of Avalokiteshwara, crudely carved in stone, lies on the path between these two shrines. It was found in some out of the way and the monks decided to place it in a temple but the combined strength of many men was insufficient to lift the stone. Then the present location was though. The temple in upper Chango is the best kept but of relatively recent vintage. Close by, a new prayer hall, library and guest rooms are nearing completion. Across the Chango stream, perched above yellow, alkaline cliffs, is an older collection of religious buildings.
Rarang Monastery at Rarang
Just outside Rarang, on the Thopan side is the newly built Monastery of Tashi Choeling. This new monastery has come in the wake of post-1960 Tibetan influences from the Drugpa sect. Close to the monastery are older dwellings and temples, merging into the rugged surface of a rocky mountain side. These older units are traced to Nyingmapa adherents.


Durga Temple at Ropa
There is a Durga temple at Ropa also known as the Chandika temple. Chandika had apportioned to herself this semi-arid tract when she divided Kinnaur amongst her brothers and sisters. Her temple at Ropa, a new structure with a reinforced cement concrete frame, is an architectural malapropism. 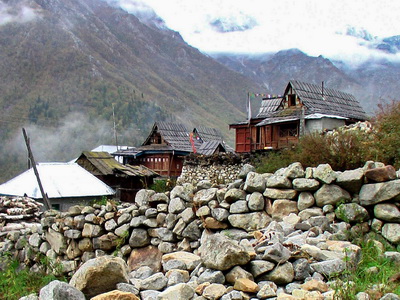 Just beyond Charang is a temple of the eleventh century known as Rangrik Tungma complex. The temple takes its name from the goddess Rangrik Tungma and her small metal image, astride a horse is the oldest at the temple. In all likelihood Rangrik Tungma must have been a pre-Buddhist deity, absorbed into the pantheon of the later religion. Two other bronze statues appear to be of considerable value; a Maitreya seated with legs pendant, in bhadrasana and a Buddha in bhumisparsha mudra. The walls of the main hall are linked with clay idols, in the same style as the mandala in the dukhang at Tabo. The wall paintings below are old although the wheel of life outside the door has been redone lately. There is also an interesting hoard of ivory and bonehandled knives and daggers at the temple. Many centuries ago, it is said a robber gang from across the Tibetan border raided the temple. The clay images of protective deities at the entrance set up a terrific noise, resembling the thundering hooves of galloping horses. The terrific robbers droped their weapons and took off, running up valley to vanish in the crevasses of the huge glaciers streaming down from the high peaks above.
Brelengi Gompa at Brelengi near Peo 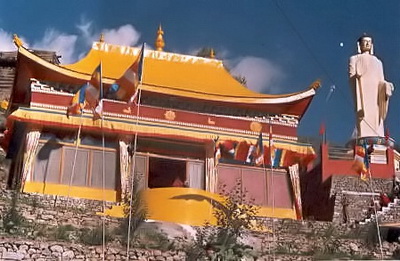 Near Reckong Peo in Brelengi there is a Buddhist Monastery also known as the Brelengi gompa.This is an impressive modern Buddhist edifice. The monastery of Mahabodhi society was constructed specially for the Dalai Lama to perform the Kalachakra ceremony in 1992. Next to the monastery is a 10 meter statue of the standing Buddha, which is visible from a considerable distance.